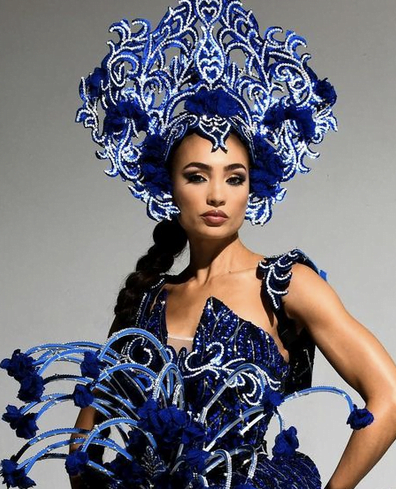 The new winner of the beauty contest was none other than Texas beauty R’Bonney Gabriel.

Who is R’Bonney Gabriel?

R’Bonney is a Filipina American, making her the first Asian American to represent Texas. So, what more do you know about the woman representing the United States at Miss Universe 2022? Continue reading to find out!

R’Bonney, 28, is a model and an experienced fashion designer from Bayou City who has even created some of the outfits she wears on stage when she isn’t winning big pageants.

She has an eco-friendly clothing collection called R’Bonney Nola, which has everything from t-shirts to denim to dresses.

She shared on Instagram how she fashioned the red outfit from the opening song out of recyclable materials.

“With fashion being one of the world’s most polluting industries, I love to re-use old pieces to build something new and wonderful to reduce waste,” she wrote.

R’Bonney’s parents must be immensely proud of their daughter.

R’Bonney’s mother is from Texas, while her father is from the Philippines. According to the Houston Chronicle, R’Bonney’s father, Bon Gabriel, emigrated from Manila at the age of 19 and went on to acquire a doctorate in psychology at the University of Houston.

R’Bonney followed in her father’s footsteps, graduating from the University of North Texas. She earned a bachelor’s degree in fashion design with a minor in fabrics.

R’Bonney was driven to improve after finishing second in both Miss Houston and Miss Kemah 2021.

“I needed to be strong in every category,” she told the site. “For the previous eight months, I worked really hard every day. I wanted to outwork the competitors and enter with confidence.”

She went on to win Miss USA 2022, with Morgan Romano of North Carolina finishing second and Natalie Pieper of Nebraska coming third.

R’Bonney was one of 88 contestants that competed for the title of Miss Texas in July 2022. She was the first Miss Texas USA of Filipino origin, wearing a handmade Rian Fernandez gown. She won the round against 50 other contestants by wearing a Patrick Isorena branded dress at the state costume exhibition in 2022.

Elle Smith of Kentucky crowned R’Bonney Gabriel of Texas as her successor at the end of the event. She will go on to represent the USA at the Miss Universe 2022. This was Texas’ first win in 14 years. At the age of 28 years, 6 months, and 13 days, Gabriel became the oldest Miss USA winner in the pageant’s history, surpassing Cheslie Kryst in 2019, who was also 28 when she crowned