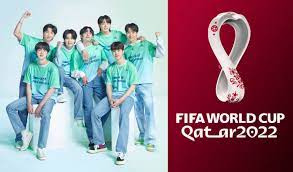 Forget ‘Waka Waka’ South Korean BTS has released a song for The FIFA World Cup, which will begin in Qatar on November 20.

BTS is a recurring brand ambassador for Hyundai, having worked alongside former English football great Steven Gerrard, current South Korean national team captain Park Ji-sung, and others to create the “Team of the Century” worldwide campaign at the World Cup. The ambassador of the United Nations for UNESCO, Danish athlete Nadia Nadeem, fashion designer Jeremy Scott, well-known sculptor Lorenzo Quinn, and others were there.

What Jaehoon Chang President and CEO of Hyundai Motor Said About BTS.

In a statement, Hyundai Motor Company President and CEO Jaehoon Chang stated, “BTS and their songs significantly affect our culture as one of the most prominent worldwide musicians in the globe. It aids in the constructive development of society.

We wish to provide people all around the world the chance to come together through the World Cup campaign with BTS, work toward a common objective of sustainability, and lift each other up.

Hayya Hayya (Better Together) by Trinidad Cardona, Davido, and AISHA and Arhbo, sung by Gims and Ozuna, are the two World Cup songs that have already been made public. BTS has also released the song “Yet to Come” to add to it. Numerous individuals throughout the world adore the song.